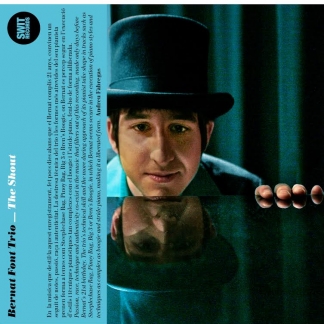 In February of 2009 the trio of Bernat Font went on stage for the first time. Since then, they have performed all through Catalonia and Spain and have toured Serbia three times. They have published three albums which received very favorable feedback from both critics and general audience. Their first album (“The Shout”) won the Enderrock award for Best New Jazz Proposal, and the piece “Big 3” was included in the movie “Song for Marion”. Bernat is backed in his trio by Martí Elias on drums and, on the bass, Ivan Kovacevic up until 2013 and currently Joan Motera.

While as a sideman and soloist Bernat Font shows his affinity with blues and the oldest styles of jazz, playing standards from the first half of the 20th century, when leading his trio he assumes a rather different role, less traditionalist and more personal, placing more and more emphasis on the task of composition. Tradition then serves not as something to be clung to but as something whose elements can be stirred in order to find a way of expression that is genuine: it is the starting point. With their foundation in swing and blues, the songs travel through different landscapes and emotions without concerns about stylistic identity. When performing live, the trio seeks proximity with the audience and balance between intensity and subtlety, exuding a sincere and warm energy, without unnecessary complexities.